WW3 is breaking out, the nuclear bombs are going off, where would you go? You may not know, but powerful individuals around the world have a plan in case of such event, and it doesn’t include you. In an EOTW scenario, mega-bunkers have been quietly built for the last 60 years, ensuring that world leaders and government structures will continue, no matter what.

There are so many underground bunkers we could explore, but we chose to focus on the largest and most significant underground facilities that we know of. Most underground bunkers that become public end up being abandoned, so most if not all of these locations won’t be the primary bunkers for government leaders when the SHTF. But we can at least get an idea of the size, precision and vastness of these subterranean cities and the networks that connect them. Let’s take a look a look at 10 very impressive doomsday bunkers.

Mount Weather, also known as the “Mount Weather Emergency Operations Center” is described as a civilian command facility in the heart of Virginia. It is also used as the center of operations for FEMA (Federal Emergency Management Agency). This site is known to be a major relocation site, which would serve as one primary location for the Continuity of Operations Plan. If the President or FEMA were to make an announcement over the Emergency Alert System, it would likely come from here.

Interesting Fact
This location was discovered when TWA Flight 514, crashed into Mount Weath on Dec. 1st 1974.

The famed Cheyenne Mountain Complex has been the subject of much curiosity. It is located close to Colorado Springs, Colorado and situated deep in 2000 feet of granite. This facility was designed to withstand a 5 megaton nuclear explosion up to 1.7 miles away.

This facility was at one time critical to to aerospace warning and control during missile or air attacks against North America. While still in use as an alternate command facility, it is likely that since this complex is so well known it will no longer be used in a significant way in the future.

Raven Rock’s construction began in 1950, when President Harry S. Truman approved the construction of this facility. It was meant for use as a relocation site for the pentagon staff (up to 3000 people). Over 1.5 million cubic yards of granite rock were blasted out during the construction period of only 10 months. There were five, 3 story buildings originally built in the complex. The complex has roughly 700,000 square feet of usable space.

Interesting Fact Raven Rock is shown the video game “Fallout 3” as being the east-coast headquarters for a fragmented government group know as “the enclave”. It is also the location of a self-aware super computer known as “ZAX”. 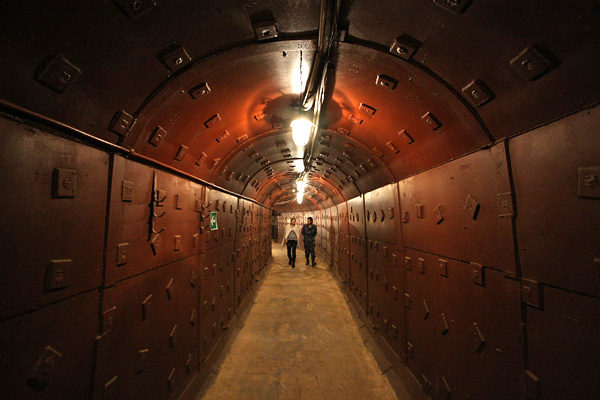 Unknown to most traveling the subways of Moscow, there is something more down there than just a basic transit system. There is a large subterranean system of secrets trains and bunkers beneath Moscow, most of which was built by Stalin during the Cold war (code named D-6). What we know about this facility is very little, mostly because there are few (if any) first hand accounts of a secret metro’s existence. Interestingly, in 1991 the United States Department of Defense released a report saying this:

“The Soviets have constructed deep-underground both in urban Moscow and outside the city. These facilities are interconnected by a network of deep interconnected subway lines that provide a quick and secure means of evacuation for the leadership. The leadership can move from their peacetime offices through concealed entryways in protective quarters beneath the city. There are important deep-underground command posts in the Moscow area, one located at the Kremlin. Soviet press has noted the presence of an enormous underground leadership bunker adjacent to Moscow State University. These facilities are intended for the national command authority in wartime. They are estimated to be 200-300 meters deep, and can accommodate an estimated 10,000 people. A special subway line runs from some points in Moscow and possibly to the VIP terminal at Vnukovo Airfield(…)”

Near Moscow State University, in the Ramenki district, there is a series of complex underground buildings. These facilities could supposedly hold up to 15,000 people, which is an unheard of amount of people compared to most government bunkers. They could also maintain this system for up to 30 years, which is again very unprecedented.

Interesting Fact
The Underground City is referred to as “Ramenki-43” by the general public. 43 is thought to be the address of one of the facility entrances.

This facility, while not officially recognized as a survival bunker, could easily be viewed as one. Taking up 10,000 square feet of space in a 1,000 acre limestone mine, the Iron Mountain storage facility is massive and rumored to be one of the most secure locations in the world. Records were stored here as early as 1954 but in 1998 a private company called Iron Mountain Incorporated purchased the old mine.

Today everything from social security records to bill gates private collection is stored here. All of the most important records will be stored in the refrigerated archive at a cool -4 degrees. Records stored in this way could be preserved for thousands of years.

There is speculation that this facility would double over as a relocation center for Americas private industry moguls. The mine includes a 5 engine fire department, power generators, de-humidification, refrigeration and air filtration systems, an underground lake with water purification, as well as high tech sprinklers, plumbing and wiring throughout.

Interesting Fact
Despite it’s sterling reputation, Iron Mountain has lost records on 3 occasions. Over a million records have been lost between the 3 accidents.

This entry was posted in Survive Food Crisis and tagged Bunkers, Doomsday, Impressive. Bookmark the permalink.